skip to main | skip to sidebar

At KnowledgeSmart, we spend a lot of time speaking to firms about performance improvement. So what happens when, in the pursuit of advanced learning, we experience a slow-down in our development? We hit what is sometimes referred to as a 'learning plateau'.

A learning plateau occurs when forward progress seems to have stopped while engaged in learning a new skill. These plateaus are normal and commonly experienced periodically when learning to play a musical instrument, speak a new language, or learn some other complex discipline.

Dutch author, Lodewijk van den Broek, describes hitting the plateau as, ‘the experience where you feel that no matter how hard you try, there is no progress in learning. And even though this is not entirely true, the feeling is very real’.

According to van den Broek, there are two major things happening here. The first is that you have progressed past the bend in the 'learning curve'. There are different stages in the learning curve:


The curve is very steep and you learn very fast.


This is past the bend in the total curve. Learning speed declines and this phase takes longer than the beginner stage.


Learning speed declines even further and the length of the stage increases as again.


Learning speed drops to slow progress and the length of the stage stretches into eternity.

So once you hit Intermediate level, your progress slows down. And at the same time it gets increasingly difficult to measure that progress. These effects combined result in the feeling that you have hit a plateau in learning.

US authors, Brett & Kate McKay, describe a road map for overcoming Performance Plateaus. Back in the 1960’s, two psychologists, Paul Fitts and Michael Posner, set out to uncover why we plateau. They discovered that when we acquire a skill, we go through three stages.

The first stage of skill acquisition is called the cognitive phase. In this phase, we must concentrate intently on what we’re doing as we figure out strategies on how to accomplish the skill more efficiently and effectively. The cognitive phase is riddled with mistakes as we learn the ins and outs of our new pursuit.

The final stage is the autonomous phase, or what Joshua Foer, author of ‘Moonwalking with Einstein’, calls the “OK plateau.” We reach a skill level where we’re able to capably do the task without having to really think about it at all. Remember about how much you thought about what you were doing when you first got your driver’s license? Now driving is fairly automatic, like brushing your teeth.

People used to think that you couldn't break past these plateaus because a plateau represented the limit of your genetic ability. No amount of exertion or education would help you overcome this wall. But Fitts, Posner, and other psychologists discovered that with the right approach and a few attitude adjustments, all of us can bust through our plateaus and reach even higher.

How to Overcome Plateaus
Take risks. Growth comes when we stretch past our comfort zone. The big reason many people (especially high-achievers) plateau is because they don’t like to fail. Instead of taking on challenges that will help us grow, we stick with routines that we know we can successfully do. To protect our ego, we’d rather do the wrong things correctly, than do the right things wrongly. This aversion to risk is a recipe for plateauing.

Embrace your failure. To overcome your aversion to risk, you have to give yourself permission to fail and be mediocre. Instead of avoiding the things that are hardest for them, the greats of the world specifically focus on those things; they purposefully concentrate on the areas in which they make the most mistakes. This keeps them from getting stuck in the autonomous phase and propels their progress. So instead of seeing failure as a negative thing, think of your failures as steps to success. If you choose to learn from your failures, they can bring you closer to your goal.

Another reason we plateau is because everyone around us is telling us everything is fine. We often confide in people who tell us what we want to hear, not what we need to hear. For example, we finish a project and take it to somebody for some “constructive criticism,” when really we just want some positive affirmation on what we did. If you feel stuck in an area of your life, seek out mentors who won’t pull any punches and will give you the honest criticism you need to improve. Yes, your ego will get bruised, but that’s the price one must pay for personal and professional growth.

Practice deliberately. Fitts and Posner discovered three keys to breaking through your plateau:
1) focus on technique, 2) stay goal oriented, and 3) and get immediate feedback on the performance. In other words, you need to practice deliberately to break through plateaus.

Get back to basics. Even when you’re advanced at something, delving back into the basics can actually give you fresh insights that help you progress even further.

Think long term. When we think short-term, we have a tendency to feel that plateaus are permanent. But when we take the big picture view of things, we start to see plateaus as temporary way-stations that we’ll eventually get past with a bit of hard work. Moreover, by thinking long term, we give ourselves more latitude to take risks and fail because we see that missteps are just momentary setbacks in the long journey of life.
To cultivate this attitude, reflect on a time where you felt you had reached the end of your development in some area, only to later bust through the plateau. If it was possible then, it’s possible now.

Psychology author, Russell A. Dewey, PhD, describes what happens with a typical learning curve.
With repetition of almost any motor task, learning occurs, and a person becomes more efficient or effective at carrying out a task. Progress in skill learning commonly follows an S-shaped curve, with some measure of skill on the Y axis and number of trials on the X-axis. Progress is slow at first, then a subject may experience a burst of learning that produces a rapid rise on the graph. 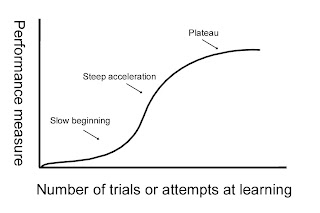 Why does an S-curve of growth eventually level off?
What people call a plateau may be a period of stability after a skill is learned as well as it can be learned. Most growth processes follow the same S-shaped curve as motor learning. In general, an S-shaped curve of growth levels off because stability is attained, a resource needed for growth is limited, or a ceiling of performance is reached.

What phases of learning a complex skill cause the "S-curve" pattern?
The S-shaped learning curve is most obvious when someone learns a highly complex task. The initial part of the curve rises slowly as a person becomes familiar with basic components of a skill. The steep ascending phase occurs when there is enough experience with rudiments or simple components to start "putting it all together." Rapid progress follows until the skill "hits a ceiling" or stabilizes at a high level.

The results were as follows:

Many times, we hear people say, I don't need skills testing or training, because I've been using (XYZ software) for many years. Could it be that, even in the case of experienced users, a learning plateau might have been reached, and a fresh approach to learning could prove beneficial in helping to further improve performance?

R
Posted by KnowledgeSmart at 17:15